A1. You are correct in the sense that the sternocleidomastoid muscle and the scalene muscles are above the ribcage and could be seen as lifting the upper torso. 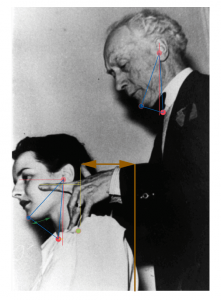 Yet, there is a fault I think in this reasoning because for muscles attached to the head or neck to lift anything, they must be first erected by the cervical column which orientation is dependent on the configuration of the middle and upper torso relationship. If the torso is not already organised, any pull coming from the head will be in the wrong direction because the cervical spine rests on the upper torso.

Any attempt to lengthen the stature by moving the fulcrum of the head up in space is incorrect and primarily the result of a wrong assumption. It started from a false premise which led to false deductions.

The fact that Alexander manipulated the head of his students in space does not mean that he thought that they would obtain the lengthening by moving their own head up. In all the work we do together, you have witnessed that the new orientation of the neck and head was a consequence of the new organization of all the movements of the different parts of the torso which you consciously direct in your experiments of conscious guidance and control.

Q2. When I pull the **sitting bones** and **iliac** forward at the same pace, it seems to me that some of the height gained comes from a shortening of the muscles on the underside of my legs. When I flex my forearm, my bicep gets shorter, but it also gets taller (in a direction perpendicular to the humerus). A similar thing appears to happen with above direction. Which muscle is shortening to create this effect? From what I can see, only the gluteus maximus would actually be beneath my sitting bones in the gesture of sitting.

The gluteus maximus main insertion is on the fascia lata.

A2. No the insertion of the gluteus maximus is not under the thigh, but to the exterior side of the femur and on the iliotibial tract.

Even if you were able to contract it maximally —which I doubt very much in sitting it would not lift you much.

Also Alexander recommanded to sit on the very border of the chair (curiously this rule was mostly remembered by his female students), in which case the muscles under the thighs cannot lift anything in bulging as their bellies are much further forward.

Q3. Is part of the increase in stature we are looking for due to one of these muscles or their fascia constantly being tensed creating a cushion that increases the width between the sitting bone and the point of contact with the chair? Or is this a side effect to be inhibited.

Q4. Do we only want stature to increase from improved geometrical relationships between bones,

Q5. or would we want to increase stature by changing the width of muscles?

The lower back displays a concave curve therefore it is not lengthened.

What I was looking at when I asked you to pull both the ***Sitting Bones*** and ***Iliac*** forward in space was this image in which it is seen that the ***Iliac*** are pulled too far back in proportion to the pull of the ***Ribs*** away from the ***Iliac***. As a result of these directions of movements, a concave curve appears at the the lower back of the torso: it is shortened and the upper torso can be said as being too low.

When I am looking at the curve at the lower back of the torso let’s say I use three control spots: the sacrum, the 12th thoracic vertebra posterior process and the posterior process of the vertebrae at the height of the armpit.

It is clear on this image that this lower line is not straight and, for someone who knows how to see, that the ***Ribs line*** is too low, with the upper torso compressing the middle and lower torso.

After asking you to direct the movements of the ***Iliac*** and ***Sitting Bones*** both forward (in contradiction with the orders of movements I asked you to project in your previous lessons) with the other directions of all the other parts of the torso, here is the configuration which you gave to see after the three (after the two seconds adjustment): 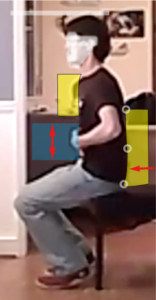 The new geometry of the lower back explains the increase in stature.

The change of the curve at the lower torso is enough to explain the increase in stature.

REMEMBER THAT IT IS BETTER TO WEAR LIGHT COLOR CLOTHES DURING OUR LESSONS.

On this image the front of the Upper Torso does NOT appear to be as low as before. You have lengthened in stature (look at the portrait above your head) and the reason for it is to be found by looking at the lower back of the torso. The ***Iliacs*** are not so far back anymore (they could be more forward a little bit still) to align the three spots at the lower back of the torso.

A ruler can be used and placed on the sacrum plate and the vertebrae at the height of the armpit to assess metrically your concerted movements.

I have also indicated that the front of the upper torso is now displaying a more organized geometrical adjustment. The upper sternum (manubrium) is not so much pulled backward relatively to the body of the sternum.

This indicate a better expansion of the upper thorax and less compression on the apical area of the lungs. 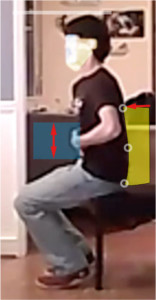 The lower back shows a concave curve because the top of the middle torso has gone forward.

This shows that my instructions are not correct, both in the sense that they are not properly understood and they do not help you to produce the result we are looking for. We need to work more on this aspect.

It’s all about creating concerted pulls to obtain an harmonic expansion of the torso. You could experiment with instructions to obtain the new concerted activity. When you have projected the directions for the movements stop all movement and check whether the new geometry  stays in place on a video recording…