Q1. I seem to have some confusion about the redistribution of weight, momentum, and the ability of tensional forces to prevent me from falling. Here is the current (and apparently faulty) conception I have:

If I am standing, and I extend my arms fully forward at a 90 degree angle to the plane of the torso, my center of gravity shifts forward. If there is not an equal amount of weight moved back over the point of contact with the floor, I will fall over forward.

This would be true if you were a stack of dead weights, if they were no tensional force in the system. Your conception of the mechanism will slowly change because you are conducting experiments which are not supporting your old conception.

If you raise your arms forward, the center of gravity will shift forward, initiating a forward rotation of the whole structure forward. If that happens and you continue to lengthen the torso, the extensor group (in red on this diagram) will be stretched and, according to the length-tension relationship, it would produce instantly more pulling force, thereby resisting the fall forward. Obviously, this is true as long as you refuse to give consent to your habitual reaction of release of the extensor system and attempt at shortening the flexor system, reaction that you have associated with any threat to your feeling sense of balance. As long as you think/feel that this old reaction is a ‘natural ‘ reaction, the correct reaction will not takes the place of your old manner of use.

In these conditions (the new system of relationships between the different movements of the parts generates a slight movement of the lower and middle torso (much greater weight than the upper limb) the dynamic movement of the whole structure backward resulting from the elastic pull would produce sufficient momentum to compensate for the momentum forward of the arms.

The question is not to change the use, i.e., the direction of the movements of the parts to which of one muscle group or one elastic tissue is attached, thereby creating a local force at one joint by stretching these tissues, but of organising the whole anatomical structure so that the effect of loading the spring system is distributed all along the whole back and torso.

Q1.2. In sitting, I have the conception that this applies similarly. If I am sitting and bring my arms extended forward at 90 degrees to the plane of the torso, my understanding is that everything above the point of contact between the sitz bones and the chair has to move backward in order to prevent me from falling. This was demonstrated to be a blatant delusion when I inclined the torso backward and forward in sitting without moving the feet or knees, and without using my arms to reach in the opposite of the inclination of my torso to counterbalance the leaning.

You have been witness of the fact that stretching the psoas group and the iliotibial tract will generate an elastic force which is more than sufficient to compensate for the movement of the torso back in space in sitting while the feet stay on the ground. What is very interesting here is that no one can feel the elastic resistance of the psoas nor that of the giant ligament at the side of the thigh. Yet, could you deny their existence now?

No, there is no “redistribution” of weight in the legs. The concept of “redistribution of weight” is not accurate. You are again trying to reason with a partial view as if there was only the weight applying force to explain the movements of the different parts of the torso relatively to one another and resulting equilibrium of the whole system.

Q1.4. Or am I missing something entirely in thinking there is a very small margin of error when it comes to having enough weight forward and back of the point of contact with the floor?

The purpose of the procedures is not to “balance the weights” of the different parts. It is to use the weight, geometry, momenta to obtain and use tensional forces —antagonistic actions— which make mechanical advantage. Just envision for a moment that the whole notion of “release” is not what you think, but just “collapse”.

We want to employ the lengthening tension in all the elastic tissues (ligaments, tendons, muscles) linking the parts of the anatomical structure. Once these “conditions” of geometry (length) and psychology (refusing to release and collapse the antagonistic forces) are constructed, then the “right thing does itself”. 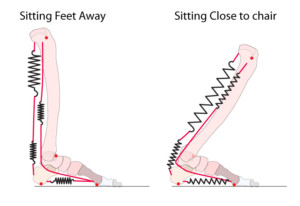 Poise is constructed by means of tensional forces. As soon as the arm movement forward pull the center of gravity forward, the extensor spring system is stretched and delivers more force.

In the model, I was showing that sitting with the feet close to the chair “trains” the spring resistance of the extensors of the ankle. Similarly, as soon as you raise your arm, you would get the same type of stretch on the extensor, i.e., the weight of the arm generate a rotation forward of the lower leg at the ankle and lengthen the muscle of the foot and calves, producing a counter-force backward. This is called a pre-flex, and its main characteristic is that it is not a cerebral or spinal response –with inevitable latency– but a property of the mechanism geometry in psychological condition where the subject does not give consent to releasing anything.

Q.3. You mentioned momentum in our last lesson. Does bringing momentum into the equation imply that that faster I raise my arms forward 90 degrees to the plane of the torso, the faster the shift of weight backward over the tallus would have to be?

The force-velocity rule (which imply that fast shortening muscles lose their force in proportion to the speed of shortening of the tissue) does not apply to lengthening muscles. Their pulling force stays the same at the range of speed where a shortening muscle loses its tension force. Therefore, the lengthening of the extensors at the ankle and back of the leg would dampen the fast movement of the arms without any trouble –as long as you do not react or prepare to react by releasing (collapsing the spring effect) and stiffening as you sensory habits command.

Q2. The video of the singer you sent me breathing shows her bringing the throat forward and up [when taking a breath], but I saw the throat come back down as she exhales. I thought the throat was supposed to continue to be held high on the exhalation, and am slightly confused by the gesture, as I do not know how the throat could come down on exhalation without the ribs also descending, unless the cartilagineous attachment to the sternum is much mpre flexible than I had imagined.

The instruction of the “Lotta vocale” is to continue the harmonic expansion of the upper thoracic cavity while breathing out. “Holding the **throat** high” is not an appropriate wording. She is certainly not thinking of holding but of giving consent to a movement going up and forward.

This means directing the movement of the ***Throat*** upward when your feeling tells you to drop the throat. Watch the little video again and you will see that the downward movement of the throat is totally marginal.

The reason I wanted you to see this clip is somewhat different. I wanted you to realise that her lower thorax does not expand at all —it narrows— when she breathes in. Thereby she is really using the upper thoracic cavity. And it is clear that her ***Throat*** is going forward and up when takes the breath.

Q4. I think the difficulty I had in breathing in the last lesson was due in part to the belief that I had to feel as if I was breathing to know that I am breathing. From an objective viewpoint, does pulling the throat forward and up while pulling the ribs at the back of the armpit away from the sitting bones, pulling the rib 8 away from the iliac while keeping the free ends close together, and raising the wings of the nose create enough of a partial vaccum in the thorax that it doesn’t matter if I feel I am breathing, the air is drawn in anyway?

It is not exactly as you say. All the movements we are directing will expand the torso to its (near) maximum capacity and so doing, will create mechanical advantage working conditions for the diaphragm (i.e., maximum length and width). Then, when the diaphragm contracts, it creates a depression which fills the entire capacity with atmospheric air pressure. What Alexander called Full Thoracic Breathing or Full Chest Breathing is breathing in and out with a full (fully expanded) chest.