Q&A_Is it normal to feel discomfort in controlling directly the muscles of the abdominal wall?

Q1. I’ve been practicing adjusting my [movements] organization throughout the day and have been experiencing some resulting sensation in my abdomen which feels a little uncomfortable. Is this normal? Maybe I’m just not used to having my abdomen pulled back?

F.M. Alexander and the inevitability of discomfort

No matter what method of plan, system of thought, or ideas may finally be chosen as the best for dealing with man’s shortcomings and difficulties in making changes, in the last analysis, success will depend upon the individual’s capacity to carry out a decision to gain an end by the conscious employment of new “means-whereby,” involving unfamiliar psycho-physical experiences which feel wrong, discomfort frequently amounting to irritation, and a sense of unsteadiness in equilibrium. (Alexander, F.M., “The universal constant in living, Chaterson L.t.d., 1942, third edition 1947, p. 105)

A1.2. Before we go on further, let’s review the model of the mechanism we are supposed to readjust.

A new model for the mechanism of the torso: lengthening and narrowing an X

On this two diagrams presented below, the obvious difference between the two statures is the length of the structure, i.e., how far the upper torso is lifted away from the lower torso. We are going to reason how the movements of adjustment which lifts the upper torso away from the lower torso, i.e., “lengthening the torso”, must be aided by a readjustment of the bony structure of the lower ribcage from day to day. In this way, the series of adjustments we project during two seconds can continue on their own a long time.

To pass from wrong to right conditions associated with posture and functioning means change, and if a person is to make this change successfully, it must be by a gradual process of change from day to day, so that the effect of the readjustment of the bony structure, the abdominal viscera, the vital organs, the interference with the habitual sense of equilibrium, and the disturbing influence of experience in doing what feels wrong, may not retard the process. (Alexander, F.M., “*The universal constant in living*, Chaterson L.t.d., 1942, third edition 1947, p. 83)

At the same time, we are going to re-construct reasoned answers to these two questions: why should the lateral distance between the lower ribs narrowed and what explains Alexander’s indication that the muscles of the abdomen should be directly controlled to reduce a protruding abdomen? 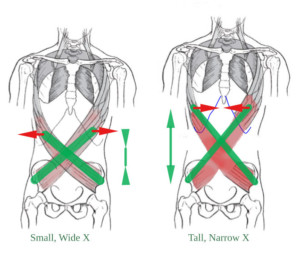 The different geometries of the imaginary addominal X.

The imaginary “X” we are using to guide our decisions of movements is drawn on this picture by showing the internal and external obliques muscles which connects the ribs and the pelvis. (The X connects the ***Iliac*** with the opposite ***Ribs***).

When the X lengthens as a result of the series of preliminary movements you are giving consent to and which lifts the upper torso away from the lower torso, the [upper extremity of the] X narrows and the wide band of ligament sometimes called the rectus abdominis sheath (the Scarpa’s fascia), i.e., the connective elastic tissue in the center of the anterior abdominal wall lengthens and narrows. As it is attached to the transversus abdominis (trA), the latter is pulled toward the center. In this way, we will see that the transversus abdominis pulls laterally on the elastic tissues at the back: it widens the lower back. 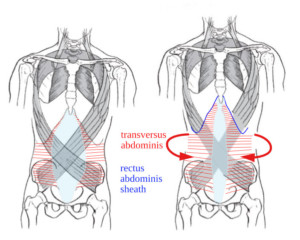 The effect on the back of the torso of lengthening and narrowing the abdominal X.

Lengthening the X and pulling the belly back (especially at the moment of breathing-in because our unreasoned habit is to give consent to the opposite movements), are not movements synchronized consciously for cosmetic purpose, but to obtain a new widening at the lower back which will maintain the maximum expansion of the torso. I will explain the rationale behind this statement.

The transversus abdominis, innermost flat muscle of the abdomen, is attached at the front to the large inguinal ligament and the rectus abdominis sheath (the vertical white-blue band shown on the frontal view), the iliac crest, the costal cartilages (7-12), and at the back at the thoracolumbar fascia. The horizontal red lines drawn on these images indicate the direction of the pulls because they show the direction of the muscle fascicles. This diagram shows that, when the upper torso lengthen away from the lower torso, the rectus abdominis sheath will pull on the fibres of the transversus abdominis and widen the tissues at the thoracolumbar junction at the back of the lower torso. 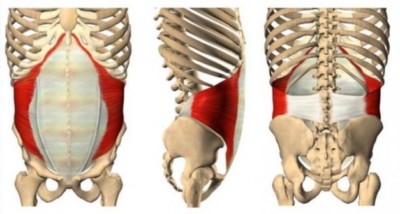 Three views of the transversus abdominis during incorrect coordinated movements of the different parts of the torso.

When the upper torso is collapsed down by habitual movements, the central abdominal ligament is lax and wide (see picture), and the pull of the transversus abdominis is minimal. When as a result of habitual movements of the different parts of the torso, the lower back is forward and the upper torso back, as in the middle diagram sagittal view, we SEE Alexander’s “protruding abdomen⁠1” and the <span s